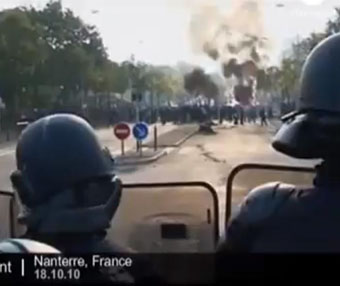 A new set of riots by Third World “youths” in Amiens, France, has once again focused attention on the utter disaster of “multi-culturalism” and if left unchecked, the disastrous—and ultimately fatal—consequences for western civilisation and the white race.

All over France, the “banlieues” (the controlled media codeword for hellhole Third World ghettoes) have developed as millions of Third Worlders have flooded into that country.

It is in these “banlieues” that millions of “youths” (another controlled media codeword for non-whites) have festered—unemployed, unemployable (contrary to the liberal lies which tell us that they are necessary to keep Europe’s economy going”) and suitable for nothing except drug gangs, violence and criminality.

The “problem” is so simple and straightforward that it is a source of wonder that liberals will actually still deny it: race. The “banlieues” of France are a problem not because of some mysterious and seemingly never-ending “social deprivation” but simply because the people living in them are from Africa, north or south.

The riots in Amiens are but the precursor to the destruction of all of Europe, if the ethnic cleansing and forced displacement and genocide thorough immigration of the white race continues.

Immigration is however the symptom, and not the cause of the problem. White liberals and the controlled media remain at the root of the issue.

A good example of this insanity has come with the arrest of the leader of the tiny “right wing” party called the Nederlandse Volks-Unie (“Dutch People’s Union”) has been arrested for the “crime” of saying in public that the Netherlands should be for the Dutch people.

According to the Dutch language Nederlandse Dagblad, NVU chairman Constant Kusters faces two weeks in jail and 40 hours community service for using the following words in public: “the Netherlands for the Dutch, own people first.”
According to the public prosecutor, these words meant that “the boundaries of free speech were overstepped.”

Of course it is nothing of the sort, but that has not stopped the hysterical leftist Dutch media wallowing in the story, claiming that the demonstration at which this “crime” occurred also had “white power flags” present, although photos show them waving Dutch flags.

One cannot but help compare the media’s coverage of this awful “hate crime” to their coverage of the statements by the prime minister of Israel, Binyamin Netanyahu, who in May 2012 announced thatAfricans in Israel were “flooding the country" and “threatening the security and identity of the Jewish state. If we don't stop their entry, the problem that currently stands at 60,000 could grow to 600,000, and that threatens our existence as a Jewish state. This phenomenon is very grave and threatens the social fabric of society, our national security and our national identity."

Funny that, no media outcry there. One wonders why… could it be…no, it surely couldn’t.
Posted by Arthur Kemp at 12:03:00

Very interesting programme on BBC4 last Thursday about the origins of the lost civilisation of the Hattusha in Turkey, they used a European language, unfortunately the BBC have depicted them as looking like North American Indians.

I've read your book 'Folk and Nation' and I was curious about your viewpoint towards people who have one ethnically British parent and one of non-european descent? My previous opinion was that mixed race people should be accorded the ethnicity of their non-white racial heritage - though Ethno-Nationalism 'bases membership of the nation on descent or heredity'. What are your views on this? As distasteful as I find miscegenation, are these people to be considered ethnically British? Obviously with the current state of British Nationalism this is all a bit premature, but I ask you out of curiosity as I prefer your logical approach to Nationalism.

Excellent exposition! Keep it up, Mr. Kemp! Your work is appreciated!