Readers of this blog will recall an earlier outburst by the minister of education in the South African province of Kwa-Zulu Natal, blaming the 1960s White South African Prime Minister Dr. H.F. Verwoerd for ‘making maths and science difficult.’

Well, it seems like evil old Dr. Verwoerd has struck again. According to an article in the Sowetan newspaper (which is South Africa’s largest circulation black paper), the “average performance” in grade nine mathematics in that country is 13 percent (!) 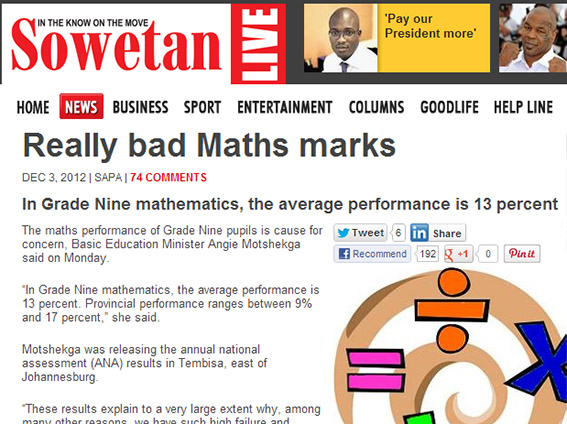 In somewhat of an understatement, Basic Education Minister Angie Motshekga told a press conference which released the annual national assessment (ANA) results that the “maths performance of Grade Nine pupils” was “cause for concern.”

“In Grade Nine mathematics, the average performance is 13 percent. Provincial performance ranges between 9% and 17 percent,” she said.

Motshekga said the department was concerned that few pupils pursued maths and science in the Further Education and Training phase, and that even those who had the potential to take these subjects did not.

“Among many other reasons, including the availability of teachers, is the fear of failing as they witness others not making the grade.”

At least she did not, like her colleague in Kwa-Zulu Natal, try to blame a white man who lived 50 years ago for the academic disaster.

At the University of the Witwatersrand in Johannesburg, Rushton, Skuy, and colleagues gave Raven’s Standard Progressive Matrices in three separate studies under optimal testing conditions. Rushton and Skuy (2000) found 173 first-year psychology students averaged an IQ equivalent of 84. Skuy et al. (2002) tested another 70 psychology students who averaged an IQ equivalent of 83.

After receiving training on how to solve Matrices-type items, their mean scores rose to an IQ equivalent of 96. Rushton, Skuy, and Fridjhon (2002) gave 198 African first-year engineering students the Standard Raven’s and found they averaged an IQ of 97. (In contrast, the White university students in these three studies had IQs from 105 to 111; East Indian students had intermediate IQs, from 102 to 106.)