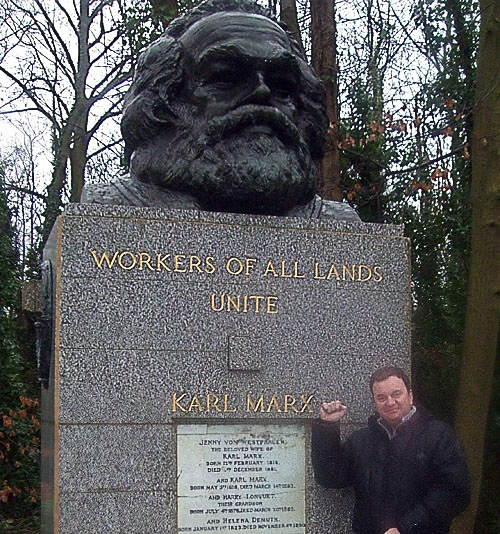 Karl Marx has always fascinated me. Here was a man who, irrespective of the rights or wrongs of his political ideology, managed to shake the earth with his ideas, providing incontrovertible proof that ultimately the pen is mightier than the sword.

After all, the 1848 Manifesto of the Communist Party, more commonly known as The Communist Manifesto, compiled by Marx and Friedrich Engels, contained many principles which will be eerily familiar to modern society.

For example, point 10 of The Communist Manifesto calls for “free education for all children in public schools.”  That is now, of course, standard practice in almost every country on earth which can afford it.

Point 10 also calls for the “abolition of children’s factory labour” — something else with which all normal people can associate themselves.

Point 5 of The Communist Manifesto calls for the “centralisation of credit in the hands of the State, by means of a national bank with State capital and an exclusive monopoly.”

When one looks at how the international banks have behaved of late — plunging the world into a severe crisis with their reckless investment in the US Third World immigrant housing market (the so-called “subprime” disaster), then one can start to feel a certain sympathy to this position as well.

Just by the way, the British state bailed out most of that country’s banks after they lost their money in the subprime catastrophe. As a result, the British state now owns nearly 85 percent of the RBS Group, one of the largest banking chains in Britain. Marx’s dream has nearly come true in Britain, it would seem.

Other stuff in The Communist Manifesto is however clearly mad, such as the “abolition of property in land and application of all rents of land to public purposes,” and the “extension of factories and instruments of production owned by the State.”

In 1991, I had the great fortune to tour the states of East Germany, Hungary and Bulgaria shortly after the fall of the Berlin Wall and saw for myself the total economic devastation wreaked by the practical application of Marx’s economic concepts.

How anyone could still be a proponent of those aspects of his ideology, is beyond me.

All that aside, it is still indisputable that Marx’s ideas were one of the most influential in the 20th century.

Marx’s Attitude towards the Jews

One aspect continually overlooked in academic studies of Marx (and I did an entire sub-course in Marx and Marxism when I got my political science degree, so I know this for sure) is Marx’s attitude towards Jews.

To call Marx anti-Semitic might be an understatement. This is particularly bizarre in the light of his own Jewish ancestry.

Marx’s grandfather was a Rabbi Marc Levy. At some stage, Rabbi Levy dropped the Levy name and changed the Marc to Marx.

Shortly after Karl’s birth, his father also changed his name, from Heshel Marx to Heinrich Marx. Heinrich then became a Lutheran, into which the young Karl was baptised. Karl’s mother was also descended from a long line of rabbis and unlike her husband, stayed true to her faith.

Hence the strangeness of Karl’s 1843 essay, titled “On the Jewish Question”.

This was supposed to be an analysis of the position of Jewry versus the rights of the proletariat, but quickly descended into a violent anti-Jewish polemic.

“What is the secular basis of Judaism? Practical need, self-interest. What is the worldly cult of the Jews? Haggling. What is his worldly god? Money! … What is contained abstractly in the Jewish religion — contempt for theory, for art, for history, for man as an end in himself.” — Karl Marx, Selected Writings, by Karl Marx and Lawrence H. Simon, 1994, page 22.

In his 1845 book The Holy Family or Critique of Critical Criticism against Bruno Bauer and Company, co-written with Friedrich Engels, Marx expanded upon his 1843 diatribe against Jews by writing that he had “proved that the task of abolishing the essence of Jewry is in truth the task of abolishing Jewry in civil society, abolishing the inhumanity of today’s practice of life, the summit of which is the money system.” — The Holy Family Chapter VI (3), The Jewish Question No. 3, Karl Marx Mainz, 1845.

Ferdinand Lassalle, another German-Jewish socialist with whom Karl worked, had the misfortune to be dismissed as a “Jewish Nigger” by the founder of the egalitarian worldview of Communism.

In a letter to Engels dated 30 July 1862, Marx wrote that “the Jewish Nigger, Lassalle” was fortunately leaving London that weekend to return to Germany, adding:

“It is now absolutely clear to me that, as both the shape of his head and his hair texture shows — he descends from the Negroes who joined Moses’ flight from Egypt (unless his mother or grandmother on the paternal side hybridized with a Nigger). Now this combination of Germanness and Jewishness with a primary Negro substance necessarily creates a strange product. The pushiness of this fellow is also Niggerish.” —Marx To Engels in Manchester, Der Briefwechsel zwischen F. Engels und K. Marx, Stuttgart, 1913.

Eventually Karl and his family settled in London, where he was to live until his death.

Somehow he got a position as London correspondent of the New York Tribune, which was at that time the largest and most influential newspaper in America — all this while he was working on his most famous work, Das Kapital.

Much of Karl’s writings in the New York Tribune was also overtly anti-Semitic. For example, in a Leader article published in 1856, he wrote as follows:

“Thus we find every tyrant backed by a Jew, as is every Pope by a Jesuit. In truth, the cravings of oppressors would be hopeless, and the practicability of war out of the question, if there were not an army of Jesuits to smother thought and a handful of Jews to ransack pockets.

“Take Amsterdam, for instance, a city harboring many of the worst descendants of the Jews whom Ferdinand and Isabella drove out of Spain and who, after lingering a while in Portugal, were driven out of there too and eventually found a place of retreat in Holland.

“The real work is done by the Jews, and can only be done by them, as they monopolize the machinery of the loanmongering mysteries by concentrating their energies upon the barter trade in securities. Here and there and everywhere that a little capital courts investment, there is ever one of these little Jews ready to make a little suggestion or place a little bit of a loan. The smartest highwayman in the Abruzzi is not better posted up about the locale of the hard cash in a traveler’s valise or pocket than those Jews about any loose capital in the hands of a trader. The language spoken smells strongly of Babel, and the perfume which otherwise pervades the place is by no means of a choice kind.

“The fact that 1,855 years ago Christ drove the Jewish money-changers out of the temple, and that the money-changers of our age, enlisted on the side of tyranny, again happen to be Jews is perhaps no more than a historic coincidence.

“Thus do these loans, which are a curse to the people, a ruin to the holders, and a danger to the governments, become a blessing to the houses of the children of Judah.

“The fortunes amassed by these loan-mongers are immense, but the wrongs and sufferings thus entailed on the people and the encouragement thus afforded to their oppressors still remain to be told.

“The loan-mongering Jews of Europe do only on a larger and more obnoxious scale what many others do on one smaller and less significant. But it is only because the Jews are so strong that it is timely and expedient to expose and stigmatize their organization.” —Karl Marx, Leader article, New York Tribune, 4 January 1856. As reproduced in The Eastern Question: Letters Written from 1853 to 1856 Dealing with the Events of the Crimean War by Karl Marx, Eleanor Marx Aveling, Edward Bibbins Aveling, Routledge, 1994 pages 600-606.

I used to be a Marxist before I became a racial nationalist. The Communist Manifesto is a really remarkable little pamphlet, way ahead of its time. I first read it when I was a disillusioned 17 year old (prime convert material) and was greatly impressed by it. It was hard for me to finally accept that it was all bunk.

It is really is a shame just how disastrous socialist economies turned out to be. It would be nice if there were some obvious alternative to the insanity of the modern capitalist system.