The South African Communist Party has finally admitted that Nelson Mandela was a senior Central Committee member, exposing as lies the deceased ANC’s leader’s claims to the contrary made in his autobiography, his official biography and during the famous Rivonia Treason Trial, where he denied to the world that he was a Communist party member.

The post-mortem confession by the Stalinist SA Communist Party (SACP) is contained in the latest edition of their party journal, Umsebenzi, as part of their eulogy to Mandela.

The article, titled “The true revolutionary is guided by great feelings of love,” the SACP wrote that

“At his arrest in August 1962, Nelson Mandela was not only a member of the then underground South African Communist Party, but was also a member of our Party’s Central Committee.


“To us as South African communists, Cde Mandela shall forever symbolise the monumental contribution of the SACP in our liberation struggle.
“The contribution of communists in the struggle to achieve the South African freedom has very few parallels in the history of our country. After his release from prison in 1990, Cde Madiba became a great and close friend of the communists till his last days” (Umsebenzi Online, Volume 12, No. 42, 6December 2013). 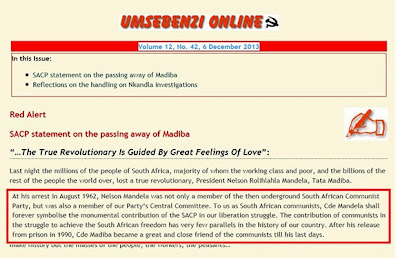 Not only does this confession finally end the debate over whether Mandela was a Communist or not, but it also reveals him to have lied blatantly on at least three public occasions over the matter.

The first time was at the trial at which he was sentenced to prison, where, in his statement to the court, he denied being an SACP member in the light of a handwritten (by him) document being handed in as evidence titled “How to be a Good Communist.”

At the time, Mandela admitted to writing it, but claimed that it was just a copy of something someone else had written, and was not authored by him.
Addressing the court, Mandela declared that he had “never been a member of the Communist Party,” and that he disagreed with the movement’s contempt for Western-style parliamentary democracy.

It must be remembered that, at the time when Mandela was an SACP Central Committee member, the party was completely allied to the Soviet Union, which had only recently brutally repressed democratic uprisings in a number of eastern European nations.

The news that Mandela chose to lie about his hard-line Communist affiliations is unlikely to worry the sycophantic westerners now grovelling at his passing.
Posted by Arthur Kemp at 15:41:00

Whereas the Afrikaners worked and fought hard over many years to achieve what they had in South Africa, the average African expected after the fall of Apartheid that everything would fall into their laps. They all expected to be rich and have a large house with a big TV, stereo and a swimming pool for doing very little.
That is why their dream of a Rainbow Nation is doomed to failure.

Mr. Kemp, how does one get in touch with you?

I am interested in trading ideas with you about multimedia outreach programs whereby your message is amplified across a variety of mediums.

David--get hold of me via the contact form at http://ostarapublications.com